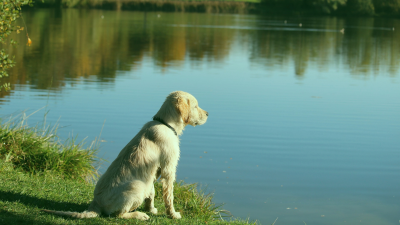 Blue-green algae are a type of bacteria called cyanobacteria, which produce toxins called cyanotoxins. Exposure to water that contains these toxins is dangerous and potentially deadly to several species, including humans and their pets.

Blue-green algae are present throughout North America. According to the American Society for the Prevention of Cruelty to Animals (ASPCA), these blooms “thrive in bodies of fresh water when the weather is warm (over 75 degrees) and sunny.” Lynn Buzhardt, DVM elaborates that algae “grow readily in hot, humid climates where water is warm. Although the largest algae bloom occurs in late summer and early fall, it has a longer growing season in temperate climates.”

As Miranda Carney writes in an article for the American Kennel Club, dogs are generally viewed as being at higher risk because they are more likely to play in or drink from non-flowing freshwater. However, other animals including pasture animals (for example, cows, horses, or sheep) are also at risk: “Livestock that drink stagnant water from troughs may also ingest toxic algae,” says Dr. Buzhardt. She also notes that, while cats are also susceptible to cyanobacteria, they are at lower risk because “they rarely swim and are pretty picky about the water they drink.”

Symptoms of Toxic Exposure to Cyanobacteria

As Kendall Curley explains in the article How to Protect Your Pet from Toxic Blue-Green Algae, several cyanobacteria produce toxins that “affect different parts of the body.” Symptoms of exposure vary according to the particular type of toxin:

Blood in the stool or black, tarry stool

Prevention Is Crucial for Pet Safety

Prevention is the best method for keeping your pet safe from the serious effects of toxic blue-green algae. According to the United States Environmental Protection Agency (EPA), do not allow your pet to enter or drink water if:

What to Do if Your Pet is Exposed

There are currently no antidotes for toxic blue-green algae, and so exposure may be incredibly dangerous. “Very small exposures, such a few mouthfuls of algae-contaminated water, may result in fatal poisoning,” warns the Pet Poison Helpline. Blue-green algae are also dangerous because their toxicity takes effect so quickly; “signs of poisoning occur within 30-60 minutes of exposure,” says Dr. Buzhardt.

Take action immediately if you think your pet has been exposed:

Report any water source to your state’s health department if you suspect it is contaminated. “By reporting these instances,” writes Curley, “you can not only help prevent other people and pets from exposure, but you can also help researchers to understand, track and prevent these blooms.”