Skip to content
Mental Illness and the Positive Effect of Pets

Mental Illness and the Positive Effect of Pets 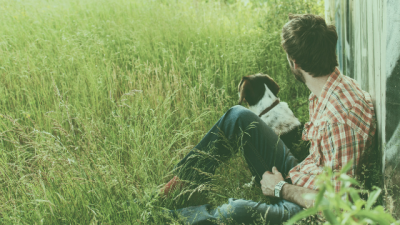 Pets bring out the best in their owners and the people around them. A study done between Miami University and Saint Louis University found that pet-owners had higher levels of self-esteem and conscientiousness than non-pet owners, and were more apt to be less lonely and less fearful. It is common to find seeing-eye dogs and K9 police dogs, but what about service dogs for something even more common, mental health?

According to the National Institute of Mental Health (NIMH), 18.6% of adults in the United States deal with some form of mental illness. Service dogs can be trained to specifically help those with psychiatric disorders, seizures, anxiety, autism, and even diabetes. Dog ownership has also been tied to possibly helping veterans recover from post-traumatic stress disorder (PTSD).

An article from CNN interviewed a man named Sgt. Charles Hernandez and his Labrador Retriever, Valor. In the article Hernandez refers to Valor as his personal physician. Valor would pull him away from conflicts, alert him to seizures, and jump on him during an anxiety attack to calm him down. Between Valor and medication, Hernandez says that the combination has helped his symptoms of post-traumatic stress disorder.

While some are skeptical about the healing powers of pets, the remarkable stories and benefits are hard to ignore:

Love and Compassion: Pets have an ability to create love and companionship unlike anything a human could replicate. Many struggling with mental illness strive for that bond and interaction that a pet is able to provide them.

Touch: Studies have proven that just the act of petting a dog or cat can lower your heart rate and in turn create a calming environment.

Social: If social interaction is difficult, pets can help bridge that gap. Pets are great communication starters at the dog park or even waiting at the vet’s office.

Responsibility: Pets give their owner a sense of responsibility. They also gives the owner reassurance and a positive focus on life as well as reminding the owner that they are more capable than they might think.

Keep in mind that pets are not for everyone with a mental illness. Do some research and see if adding the responsibilities of a pet would help or hurt the current situation. Sometimes the routine of animals is beneficial, but it can also be harmful to individuals that do not deal well with the constant structure, not to mention that owning an animal can be very expensive so financial consideration should also be assessed.

Animals continue to impress us with their talents every day. Hernandez and others have started campaigning for the increased use of service dogs for mental illness. To some, dogs are more than a pet: they are medicine.