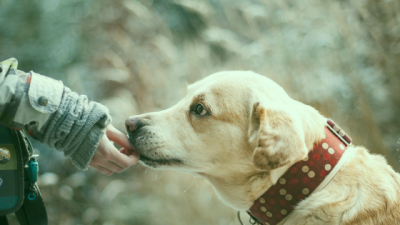 When breeding animals for desirable traits, sometimes the less desirable genes can become predominant. Consequently, according to an interview with Dr. W. Jean Dodds at The Thyroid Summit, somewhere between 20 and 50 breeds of dogs now have a higher risk of developing autoimmune thyroiditis, which is akin to Hashimoto’s disease in humans.

Hypothyroidism doesn’t develop overnight; hence owners, and even veterinarians, may not realize it has taken hold at first. Dr. Dodds says to look for changes in behavior, or unexplainable weight gain could also be a sign. If something seems “off” with the pet, take a picture or video when you notice it to document it and watch for changes over time. Warning behaviors can include licking the feet or chewing at a certain spot in the skin, so much so that hair loss occurs.

The thyroid controls the metabolic rate in both humans and dogs. But understanding what normal thyroid activity is for dogs is a lot more complicated than it is for humans. In addition, there are differences among breeds, as well as among dogs of different weights and ages. Not all dogs can be treated in the same way.

Dr. Dodds believes that the overuse of iodine in some dog food products is partly responsible for the rise in autoimmune thyroiditis. In the last 15 years, the major dog food producers have increased the amount of iodine in their products, while the incidence of hypothyroidism in dogs is also increasing, even though the intent for adding the iodine was to help decrease the incidence. Dr. Dodds cites research done in South America that suggests that too much iodine can actually activate thyroiditis. She claims that there has to be enough iodine in the diet, but not too much.

In addition to an iodine excess, other foods can also interfere with a dog’s thyroid function. For example, unsuspecting owners who add products such as kelp to their dog’s diet can further compound the problem of extra iodine in manufactured pet food. Soy and grains can also be goitrogenic, meaning that they suppress the function of the thyroid gland by interfering with iodine uptake. Dogs, just like humans, can suffer from gluten intolerance and may need to avoid grains such as wheat, rye, and oats. Corn that is genetically modified can irritate the digestive tract, thus setting the stage for an autoimmune response as well. Pea and pea fiber in pet food can delay puberty and interfere with fertility.

Vaccines may also be contributing to the problem. Rabies vaccines are required by law but have been shown by Dr. Larry Glickman at Purdue University to elevate antithyroglobulin antibodies (a measure for autoimmune thyroid disease) in about 25% of the animals tested. Almost all of the rabies vaccines contain mercury (in the preservative thimerosal), which can also interfere with thyroid activity.

Certain drugs, including phenobarbital and sulfa-containing drugs such as antibiotics, can also interfere with thyroid function, as can long-term use of anti-inflammatory steroids such as prednisone.

Dr. Dodds recommends testing for free T4 rather than total T4 hormones for better accuracy. TSH is not helpful unless the level is high enough to motivate for more comprehensive testing. She is likely to order a whole thyroid panel including TSH, free and total T3, and T4, as well as thyroid antibodies to have more information for evaluating the pet’s thyroid status.

If supplementing thyroid, Dr. Dodds recommends the dosing should be twice daily. She says this is somewhat controversial because some veterinarians recommend starting at twice daily, and then maintaining single daily dosing. However, although it is less convenient for the pet owner, she believes that dogs will fare better on twice-daily dosing.

Dr. Dodds suggests that thyroid should not be given with food because calcium and soy in the food could interact with and diminish the effectiveness of the thyroid. She recommends that thyroid be given directly with a treat, such as in a small piece of meat, or in peanut butter, or in a marshmallow. She warns against using cheese because of its high calcium content.

Hypothyroidism is a complicated condition, and it is often overlooked both in humans and their companion dogs. Dr. Dodds believes that better diagnosis has to start with better training in professional schools. In the meantime, pet owners who are informed about the problems associated with hypothyroidism are in a better position to discuss it with their veterinarians, and follow up with more extensive testing, if necessary.