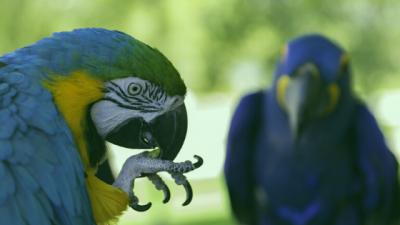 Hormones affect diverse aspects of a bird’s life, ensuring physical health and influencing instinctual behaviors. Normal behaviors such as breeding and sleeping are at least partially directed by hormone production. If a bird’s hormones become unbalanced, however, serious health problems may occur—either through excessive hormone production, hormonal deficiencies, or a combination of both.

In a 2011 study, researchers at the Max Planck Institute for Ornithology found that hormone levels influence a successful breeding season. Specifically, the hormones corticosterone and prolactin may be measured to predict when a breeding pair will begin laying eggs, how often they’ll lay eggs, and the total eggs they will lay during the breeding season. Corticosterone production increases during activity and stress, inhibiting reproduction. In contrast, prolactin stimulates reproduction, and “plays a crucial role in the timing of laying the first egg: females with higher prolactin levels started to lay earlier and had more offspring as a result.”

Whether in the wild or in captivity, most birds demonstrate a remarkable periodicity to their days. Restoration of a regular recurring day and night cycle usually results in a happier and healthier companion bird. Ideally the photoperiod would begin at dawn when most birds, covered or not, sense the new day and begin to stir. As most [pet] birds are from equatorial and subequatorial latitudes where day length is roughly twelve hours year round, establishing a routine that follows a 12-hour day with a 12-hour night is ideal. Birds have in their brains a finely tuned, light sensitive pineal gland. This gland is likely the mechanism by which birds set their circadian rhythm.

Hormonal disorders are generally due to a dysfunction of the glands that produce them. PetMD’s article Hormonal Disorders in Birds lists a few reasons that may affect a bird’s hormone glands:

In the hormonal disorder avian diabetes mellitus, a bird’s pancreas produces too much glucagon and too little insulin. This leads to high blood sugar levels. According to PetMD, this disorder affects birds “that are obese and have problems in the pancreas and reproductive organs.”

Symptoms of diabetes mellitus may include:

Another hormone-related disorder in birds is iodine deficiency, which PetMD defines as affecting the thyroid gland, “enlarging it from its usual size of three millimeters to about one centimeter, or more.” Aside from a telltale lump on its neck (due to the enlarged thyroid), birds with iodine deficiency may show other symptoms, including:

PetMD suggests that preventing iodine deficiency is as simple as making sure it is included in a bird’s regular diet.

In trying to optimize a bird’s hormonal health, here are a few general measures to take:

If a bird does exhibit symptoms that may be linked to a disturbance in hormone balance, consult a veterinarian right away to diagnose any underlying problems and to determine the best course of treatment.