The Basics of Keeping of Pet Ferrets 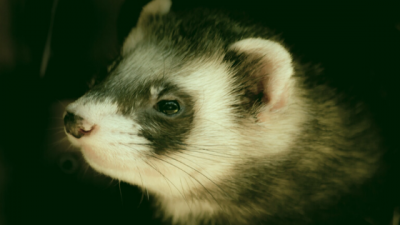 Although designated as “exotic” animals, ferrets have been domesticated for thousands of years, used by humans as working animals for such roles as rabbit hunting and pest control. However, keeping of ferrets as companion animals is a fairly modern concept.

Ferrets belong to the Mustelidae family, other members of which include weasels, otters, and badgers. Adults weigh between 1 ½-5 pounds, with males growing larger than females. Their fur comes in a variety of colors and marking patterns, and is typically shed twice a year.

Ferrets are susceptible to health problems such as adrenal gland disease, insulinoma, or canine distemper. Their average lifespan is variable; factors such as quality of breeding affect longevity so that ferrets may live five to ten years, with many estimates giving a middle-ground number of seven years.

In an article for PetMD, Samantha Drake notes that ferrets “tend to sleep a lot—18 to 20 hours a day—and are most active in the early morning and evening.” When ferrets are awake, they are extremely active. In general, ferret temperament is playful and curious, and they are intelligent enough to be trained to use a litter box, come when called, and do simple tricks.

Researching and Preparing for a Pet Ferret

Check the local laws and regulations for owning ferrets. Learn as much as possible about ferrets: their biology, habits, and needs. Network with ferret organizations, speak with other ferret owners, and find a veterinarian that is familiar with their care.

Take special care when choosing where to purchase your ferret. Make sure the pet store or breeder has impeccable references, check their background, inspect their animals’ living quarters, and check over the ferrets themselves (and their parents, if possible). Another option is to contact your local humane society or rescue centers to see if there are any ferrets available to adopt.

Obtain a wire cage, litter box, bedding, food, and toys. Preferably select supplies that are specifically designed for ferrets, although many supplies manufactured for cats may serve as acceptable substitutes. Ferrets are notorious for getting into tight spots or dangerous situations, so “ferret-proofing” is essential. (Even an opening the size of a ferret’s head may be enough room for it to get through.) Although any time spent outside their cage should be closely supervised, minimizing the exposure to hazards is paramount to keeping your ferret safe.

The best way to alleviate the odor is to clean the ferret’s cage and bedding often. Giving the ferret regular baths may also remove some of the odor. However, bathing too frequently will worsen the smell, as the sebaceous glands may begin to overproduce oils to replenish the moisture removed during bathing.

According to the American Ferret Association (AFA), most of the odor is eliminated when a ferret is neutered. In addition, surgical “descenting” is legal in some countries–though prohibited by others. Most ferrets sold in American pet stores are neutered and de-scented, which is usually signified by a ferret having two blue dots tattooed in its ear.

Female ferrets must be neutered unless they are going to be used for breeding. Female ferrets go into heat for six months at a time, which can cause fatal aplastic anemia if they are not bred. Neutering in males may also be beneficial as it minimizes some of their aggressive tendencies.

Ferrets are naturally carnivores and so require a high-protein, low-carbohydrate diet. They eat up to eight or ten small meals throughout the day. Providing plenty of clean, fresh water is also essential.

Incorporate a grooming schedule. Like cats, ferrets groom themselves, but regular brushing, nail clipping, and monthly tooth-brushing are recommended to help maintain overall health. Keep the ferret’s living area clean by washing bedding on at least a weekly basis and cleaning the litterbox daily.

As with a dog or cat, visit the veterinarian every 6 to 12 months for an examination and for keeping up on vaccinations. A veterinarian who is knowledgeable about ferrets may also recommend ear exams, blood tests, or medications for heartworm and fleas.

Healthy socialization is another key contributor to ferret training. One of the more important aspects of owning a ferret is learning to handle them properly and training them not to bite. Though ferrets spend the majority of their day asleep, they should be allowed out of their cage for at least an hour or so every day to play and interact with you. They are social animals and benefit from living with other ferrets.

While similar to dogs in their social behavior, and similar in care to cats, ferrets are very much their own animal. Keeping a ferret as a pet poses unique challenges that require vigilant care from the owner. For those willing to commit to these responsibilities, however, pet ferrets offer abundant rewards of affection, companionship, and entertainment.