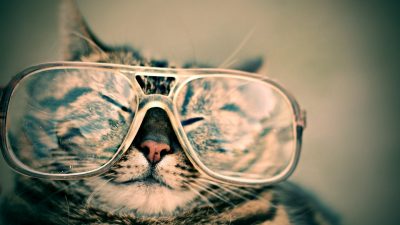 Cats possess a finely-tuned sense of sight: their vision is six times better in dim light than humans, they can see certain levels of ultraviolet light, and their binocular vision allows them to focus on and track small objects (like prey) at a distance. Along with their senses of hearing, smell, and touch, cats’ vision enables them to understand and interact with their surroundings. Protecting their eyes from injury and illness is an important part of maintaining a cat’s overall health, so it’s essential for their human companions to be vigilant about feline eye health—and to seek veterinary help as soon as we notice any potential problems.

In general, cat eyes are made up of the same basic components that function in the same way as human eyes:

Cats don’t necessarily see better than humans, but they do see differently; in general, feline vision is designed for nighttime, whereas human eyesight is more effective in daylight. Unlike humans’ round irises, irises of small cats are shaped like slits, which not only allow for more control over how much light is let into the eye, but also can dilate further than round irises. Cat retinas have more rods—thus allowing their eyes to receive more light in dim environments—and humans have more cones, allowing us to see a wider variety of colors. But while their depth perception is less focused than humans’, cats are more adept at tracking fast-moving objects.

Cats also have specialized components to the eye which humans lack, including a third eyelid called the nictitating membrane, which provides added protection against injury and also possesses a gland that produces extra tears. They also have a tissue structure located under the retina called the tapetum lucidum, which “reflects light not absorbed by the retina during its first passage through the eye, thus giving the light a second chance,” according to Cornell University’s Feline Vision Problems. It is because of the tapetum lucidum that cats are approximately six times more sensitive to light than humans, and thus only need about 15 percent the amount of light to see clearly.

Cats often hide the fact that they are not feeling well, making it difficult to catch and treat diseases before they’ve progressed. When it comes to eye health, however, cats are not as adept at disguising their symptoms, which include:

A few other common symptoms are behavioral, and so require closer observation. For instance, if a cat excessively rubs on his head or eyes—more than the normal grooming routine—it may be an indicator of itching eyes. Another subtle clue of eye trouble is if the cat seems to be having trouble seeing where he’s going—bumping into things, not reacting to a hand waved in front of the face, and general disoriented or clumsy behavior.

A cat’s entire process of vision can be affected if even one part of the eye structure is damaged. Having an understanding of any additional risks may help in diagnosing and treating the ailment more effectively. Certain cats have a higher risk of developing eye disease. Genetics, age, and environment can be significant factors in maintaining eye health.

Often cats of certain breeds, particularly cats with “smashed faces” such as Persians, have a genetic predisposition to develop conditions such as dry eye. This is possibly due to their unique eye shape, which prevents their eyelids from completely closing over the eye. In addition, many eye conditions are more common in purebred than mixed breeds.

One important non-inherited contributor to developing eye disease is the cat’s living environment. An unsanitary living space increases the cat’s exposure to allergens, bacteria, viruses, and parasites. While a cat can be exposed to these dangers indoors, the possibility is greater outside. Outdoor cats also have a higher risk of injury from other animals such as dogs, other cats, or coyotes, as well as from road traffic; severe injury to the eye can lead to infection and other serious conditions.

Many eye conditions common to cats may heal on their own or are simple to treat with antibiotics or other medications. These conditions include:

Eye disease may itself be a symptom of more serious underlying health problems, such as immune deficiency, heart or kidney conditions, or cancer. Because of this, consult a veterinarian as soon as any symptoms appear, as immediate diagnosis may be the key to successful treatment.

Cat vision often degenerates naturally with age, usually in the form of glaucoma or cataracts. Cataracts develop when the lens of the eye becomes clouded, preventing light from reaching the retina and thus impeding sight. The severity, rate of progression, and exact location of cataracts in the eye varies according to the individual animal, so the method of treatment must be decided on a case-by-case basis. The veterinarian may recommend surgically removing the cataract, sometimes replacing the lens altogether.

Glaucoma is characterized as the irreversible degeneration of the optic nerve in one or both eyes due to increased pressure in the eye. There is currently no cure for glaucoma: prevention is the only “treatment.” Medications or even surgery may be used to relieve pressure from the optic nerve in order to salvage the cat’s remaining vision. Even if glaucoma only affects one eye, the other eye’s health should also be monitored; according to PetMD’s Glaucoma in Cats, “more than 50 percent of cats with primary glaucoma will develop complications in their unaffected eye within 8 months.”

One of the more common infections in felines is conjunctivitis, the inflammation of conjunctiva membrane that covers the eyeball. Sometimes identified as pink eye or dry eye (depending on the underlying cause), symptoms of this disease include excessive tearing or discharge from the eye, swollen eyelids, and red eyes. Dr. Kirk Gelatt writes about the length of time conjunctivitis takes to run its course in Eye Structure and Function in Cats: “The signs are most severe 9 to 13 days after onset and then subside over 2 to 3 weeks. In some cats, however, signs can last for weeks despite treatment, and recurrence is not uncommon.”

Conjunctivitis can be caused by viruses (particularly feline herpesvirus-1), bacteria, allergens, or even by foreign objects becoming lodged in the eye. In order to prescribe the proper treatment, your veterinarian will first identify the cause of the conjunctivitis. If allergens or other environmental factors are to blame, eliminating those factors should solve the problem, allowing the cat’s eyes to heal on their own and preventing the problem from recurring.

If the conjunctivitis is caused by a virus or bacteria, it may start as an infection in one eye and then spreads to the other, and one form of infection may develop into a secondary infection (for instance, a case of viral conjunctivitis may lead to a bacterial infection as well). Viral or bacterial forms of conjunctivitis often require treatment with an antibiotic, usually in an external dosage form such as eye drops or a topical ointment. PetMD’s Eye Inflammation in Cats suggests two ways to preventing conjunctivitis: limiting exposure to other animals that may carry the disease, and vaccination to minimize the chance of contracting it even if your cat is exposed. “Because conjunctivitis can have multiple causes, your veterinarian may prescribe a combination of treatments, including antibiotic or antiviral therapy,” says Dr. Gelatt.

In most cases, diagnosis and treatment of ailments relating to eye health requires a visit to the veterinarian. Because of the wide variety of underlying causes to eye disease, it’s important to know as much about your cat’s medical history as possible, and to relate this in detail to the veterinarian. The veterinarian will likely conduct a full physical examination. Based on the information from past history and the exam, the veterinarian will then move on to other tests, such as testing blood or urine samples, taking X-rays, or conducting MRI scans or ultrasounds.

Although some conditions resulting from injury or age are unpreventable, there are some measures cat owners can take to minimize the risk of infections and other eye diseases:

Vision is a huge contributor to a cat’s quality of life, and any impairment can have a dramatic negative effect. Many eye diseases are relatively minor and easily treated once diagnosed by a veterinarian; other diseases may be precursors or signs or something more dangerous to your cat’s health. In both cases, taking measures to prevent eye disease, and swift action in seeking veterinary help when any symptoms present themselves, may not only spare cats from unnecessary pain or discomfort, but might even save their lives.