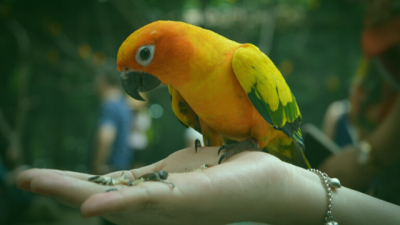 When looking into adopting a pet, there are many alternatives to the “classic” choice of cats or dogs. From other companion pets to exotic animals, the selection ranges in size, type of species, and level of domestication. Research is vital when considering an “exotic” pet, though it may be more difficult to find information on an unusual animal and thus decide whether its unique needs are a good fit for your lifestyle.

The distinction between “exotic pet” and “wild animal” is ambiguous: according to the American Veterinary Medical Association (AVMA), wild animals include “species that, whether or not raised in captivity, are normally found in a wild state.” In contrast, exotic pets are defined as a “wide range of pet species other than domestic dogs, cats, and equids [members of the horse family, including donkeys], which may be native or nonnative to the United States.” Many animals marketed as exotic pets are wild species, so consider possible health and safety issues—for humans and animals alike—before bringing an unusual pet home.

Where Do Exotic Animals Come From?

Prospective pet owners have to deal with the concern of the animal’s origins. This can be particularly difficult when looking to adopt an exotic pet: laws regarding their capture, breeding, transport, and purchasing vary according to country, region, and the specific species. Confusing or lax regulation leaves the exotic pet market vulnerable to illegal or unethical practices that negatively impact the animals’ wellbeing and pose dangers for humans, other animals, and the ecology of their new homes.

Though many exotic species are captured from the wild, some are bred domestically. However, “for an average customer walking into a pet store, it may not be obvious which animals were raised domestically or in the wild,” points out Lynne Peeples, the Environmental and Public Health Reporter for The Huffington Post. Even pet store owners may not be certain of their animals’ origins, further complicating their customers’ attempts to research an animal’s background.

Capturing wild animals for pets may be harmful in a few different ways. Wild animals with wild instincts often lack the temperament to make good pets. Additionally, removing one species from a habitat also affects its entire native ecosystem, risking an imbalance between predators, prey, and symbiotic relationships.

Some of these species are endangered; it may seem like an act of kindness to adopt an endangered animal to keep it safe, but the intention often proves nobler than the outcome. Pulling endangered animals from their natural habitat reduces their wild populations, shrinking the gene pool and lowering the reproduction rate. Most pet owners lack the expertise and training to care for one wild animal, resulting in its shortened lifespan and further diminishing the species’ population.

Capturing and transporting wildlife (whether legally or illegally) is often dangerous. Cramped, unsafe, and unsanitary conditions are all too common. Even in healthier conditions, the sudden change in the animals’ environment and quality of life causes stress, affecting overall health.

Once arrived in their intended home, exotic pets often die earlier than their natural lifespan. According to the National Humane Educational Society (NHES), many factors may lead to this premature mortality:

Captive breeding doesn’t guarantee that these animals have been bred in safe, sanitary conditions. Additionally, the NHES points out that exotic pets bred in captivity are “genetically the same as their wild brethren.” Raising an animal “domestically” doesn’t automatically make it domesticated; their instincts are still “wild” even if they’ve lived their entire lives around humans.

Whether escaped or abandoned, an exotic pet let loose in the wild is problematic: either the animal will be ill-equipped to survive on its own, leading to its death, or it will adapt to its new environment and become invasive. An exotic animal is less likely to become invasive in a climate that doesn’t fit its natural habitat. In such a case, the animal will most likely die. For instance, a parrot from a tropical climate will probably not survive a snowy winter climate.

If the environments are similar, however, escaped or abandoned pets might thrive in the wild, disrupting the natural ecosystem. “A large proportion of successful vertebrate invasions can be traced to the global exotic pet trade,” Ecological Society of America states. Examples of invasive tropical species are common in hotter climates, including Florida’s Everglades, where native bird populations have been damaged by the release of pythons into the wild.

Most wild animals should not be pets. Some obvious examples include primates, big cats (such as tigers or lions), and reptiles (such as Komodo dragons) that are capable of severely injuring humans or other animals. Even seemingly harmless or fragile species may pose a physical danger. The NHES notes Macaw parrots as an example: these birds possess sharp beaks and talons that have caused their owners to suffer “severed fingers, gauged [sic] eyes, and torn lips and ears.”

Exotic animals—particularly those plucked from the wild—often carry diseases that may be transmitted to humans, and due to the lax regulations for transporting or breeding exotic species, most animals are not screened for disease before being adopted and taken home. “An estimated three of every four emerging infectious diseases in humans originate in wildlife,” writes Peeples. Such communicable diseases include:

Even after all your preparation, you may find your exotic pet is not a good fit for your lifestyle. In such an event, surrender it to a humane society, rescue center, or accredited wildlife sanctuary so that they can find or provide a home that will better fit that animal’s unique needs. NEVER release a pet into the wild.

Responsibilities accompany every step of adopting a pet—from conscientiously purchasing from a reputable source and maintaining the animal’s health and quality of life. As a prospective owner, thoroughly research your desired species, the laws, permits, and possible health concerns, and prepare your lifestyle and home to meet the animal’s specific needs. Owning an exotic pet is not right for everyone—and not every animal is right for being a pet at all—but for some people, the challenges are compensated by the unique rewards an unusual pet offers.